Image Based Lighting and more

So last time I showed some photographs I took studying light, specifically time of day outdoor light changes.  I have been working on a short animation that involves an outdoor shot of a market as the sun sets.  Right now it is suffering from rendering errors that our renderfarm occasionally puts in, so my next step is to fix all those.  I also have a slight displacement problem, but the other big factors include the light colors and positions of the street lights.  I have a lot of work to do to make this scene work, but once it is finished, it will look really nice.

Time of Day lighting test 4 from David Hixon on Vimeo.

But that isn't all I've worked on.  I have also been taking this to another level and creating a scene that uses actual photographs and actual light information from the environment and integrated by own CG element into the scene.  In other words, like action plate CG integration.  I went out and took a series of images at SCAD Atlanta's DMC, where I captured "background plates" and environment maps.  These environment maps are made as HDRI so they hold more information than a regular image, and are then manipulated in a program called HDR Shop to fit into my CG scene.  I can then use this to capture the light information in the scene to capture the ambient light, and then tweak it from there.  I also had to render in passes, so I could isolate everything from the shadows to the reflection of the chairs to the ambient occlusion.  I finally used Nuke to composite it back together, and voila!  Movie magic!

Image Based Lighting with CG Character Integration from David Hixon on Vimeo. 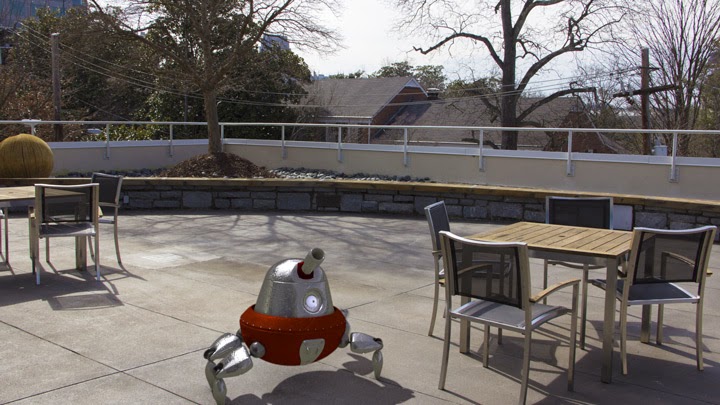 But that's not all!  I've been a REALLY busy bee.  I can't show anything currently from my last 2 projects I've been working on (not to mention math), but you can check out my other blog to see updates to my senior film, Last Light, at LastLightFilm.blogspot.com.  Besides working on my film, I have been lighting and rendering and compositing Michelle's film, Leaping Place.  It continues to be a challenge, but this entire thing must be done in one week, so it's crunch time!  I'll update more on that later!
Posted by Unknown at 4:09 AM No comments: