So it is a new year, 2016!  Happy New Year!  I wanted to start off this year with a new direction and goals.  A friend of mine set for himself last year of making a 3D model every week, and for the most part he succeeded.  I would like to set a similar goal for myself.  To complete a smaller project every week in an attempt to get better and speed up my work.
As such, I am starting with a new project.  I am still going to be working on the other longer projects as well, since I need to work on these for better lighting and surfacing practice, but my hope is I can get on a schedule and use that to speed up those longer projects.  So I will be going back and forth throughout the week on these two projects.  Essentially, I will be doing one quick project focusing on different things, and then one bigger project that will take longer to finish.  So right now, those two are the Starbucks picture, and a brand new Rey Skywalker picture.
Yup, fan art.  But not just any fan art, i am going to attempt to model her in 3D and then stylize her to look like a character from the Star Wars Rebels animated tv show.  That should simplify her enough that I can speed up her production.  I will then pose her and make a still portrait.  If I can, I will try to figure out a basic cloth sim for her robe/sash thing and get some minor animation in it.

So let me for now give you guys a screenshot of where I am right now.  Feedback is welcome! 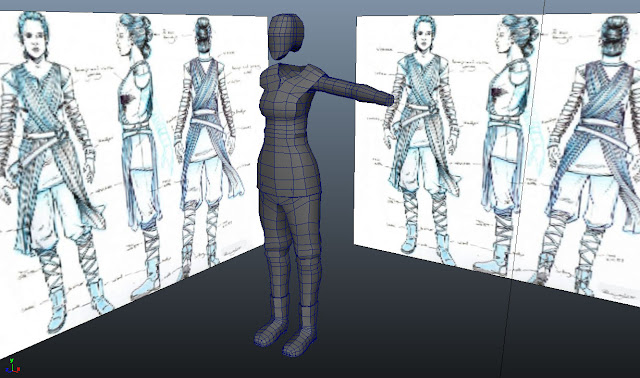 I am starting off with a single mesh for her boots, legs, pants, and shirt.  I am then going to complete a single mesh for her arms, hands, chest, neck, and head.  After that, the sash thing she has crossing her.  Right now she has relatively human proportions, so I will be using various references from the TV show to stylize her from here.  I also need to finish adjusting her edge flow, although since she is not going to be rigged for animation and only posing, I will not spend too much time on that.
Posted by Unknown at 4:36 PM No comments:

It has been a little quiet here, but for good reason.  Lately I've been busy not only with my own work, but also with background acting (aka an extra) for several films and tv shows, as well as working on texturing and lighting background elements for a pilot being developed at ECG Productions.  These other projects have taken a lot of time away form my own work, so I don't have anything new to show right now on it, but I do have something to show for all this time.  A CG integrated element into a live-action plate.
This is a really simple scene, with no camera tracking or anything.  And while it is not perfect, due to the tight time constraints and budget, I managed to give them something decent.

Essentially I was asked to be on set to help direct two short scenes for setting up digital elements.  The first was to build a 3D sign for a community.  While I feel there is still plenty more that can be done, I did the best I could in the time I had.  I had to add this sign to a flat plate, and try to blend it in seamlessly.  While it isn't perfect yet, and doesn't have any color grading on it, I'm satisfied with what I gave them.


I used Maya with mental ray to build the 3D element and Nuke to put this together.  The confusing part for me was that the premultiplied element was coming in with a very thick white border, which I had some trouble removing.  I will take a look at this later and see if I can pinpoint the problem, either in the render or the composite, and find a better solution.

So other than that, I will still be working on my Starbucks piece which I hope to finish soon, and working on a new short short.  I hope to have 3 new pieces on my reel by the end of the year, so I better get cracking!

Posted by Unknown at 5:52 PM No comments:

So there are a few things I wanted to talk about briefly.  One, I have been doing a lot of background extra acting work and meeting lots of interesting people.  One of them suggest I look into the Air Force or the Air Force Reserves as a way of making some money, making ends meet, and maybe paying off debt.  It is not a small matter at all, and has huge ramifications, so I have taken the research and consideration very seriously and carefully.  If I do anything with that, it won't be right away, and will be after a lot of deliberation between my wife and I.
Second, I have a goal in mind for my demo reel.  I want to add at least 3 new pieces before the end of the year.  This is a tough goal, and one of them I would like to be a composite of a CG character into a live action background, this time a video with tracking.  It is a huge one, so I want to get started, and I want to make it short and sweet, something funny that will get lots of hits on youtube.
Third, I have been working on various aspects of the textures, this is going to take some work to get the level of detail I want.  So bare with me, and please give me good constructive feedback on anything you see as I go.  Yes I know it is too clean right now, but the next step is going to address that.
Finally, I might need to go back to the Starbucks where I took the original picture and capture an environment from a sphere, so I can use it for the reflection map, and possibly lighting (IBL).
That's it for now.  Don't worry about the Air Force, I've been talking to several people and decided it is right now more of a last resort option since I have some time.  Until such drastic measures, I will be continuing to work on refining my work, and making something really kick ass to show off. 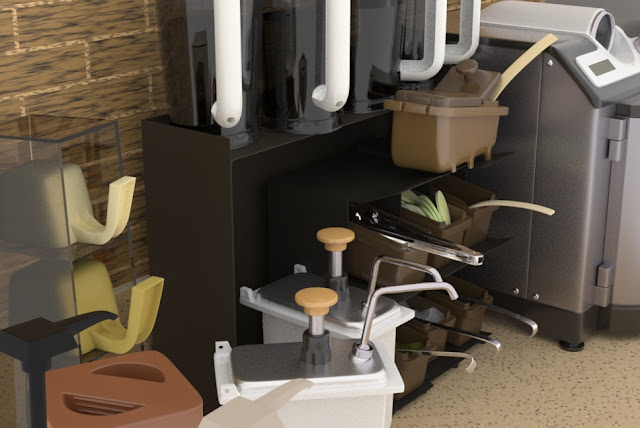 The biggest changes this now are the addition of the white and green powders, as well as fixing the number of tiles and the size of the pattern on the floor.  I think I'll start on one side of the screen and work my way across refining the surfaces and then adding the grime/dirt/scratches/grunge after.
Posted by Unknown at 2:25 AM No comments:

Well all the rough textures are in place except for the powder, which still needs geo as well.  It shouldn't take too long, and a lot of it will be bump mapped.  Speaking of bump maps, I still haven't figured out why I can't get the Renderman textures to show any bump.  I'll keep researching... 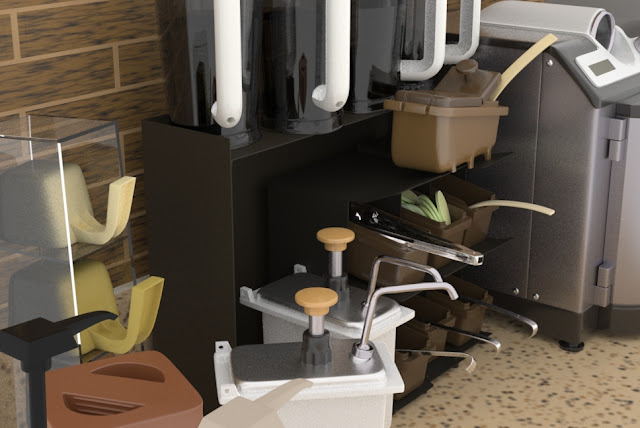 Posted by Unknown at 2:15 AM No comments:

Here's the latest with the rendering today.  The background in supposed to have a bump on it, procedurally generated with a grid texture node, but for some reason nothing shows up.  I haven't figured it out yet and it is bugging me.  I have tried all sorts of things, and the tutorials online so far haven't been any help.  I need to figure this out because it is a very important tool.
Let me know what you think.

As of right now, I've been putting in the rough placeholder textures.  Even though some of these look good, they aren't anything as good as I hope to get them to.  I still need to refine the textures/materials so they look exactly like the materials in the picture, and then i need to add all the dirt, scratches, etc.  While going through the scene, I've not only seen some geometry issues to fix and started fixing them, but I realized a giant error I'm not sure I want to fix.  It is not easy to see, which is why it might be worth cutting the corner, but the inner brown box that holds all the tongs and scoops (and the stuff within) are supposed to be 3 boxes side-by-side, and one is at an angle.  Not sure how I missed that before, but now that I see it, fixing it involved major overhauling of part of the scene.  I might go back and do this, but not yet.  It is something I will consider, but since it took so long for me to realize it, it isn't a glaring problem.
That being said, I am also struggling with the textures.  I put a granite texture on the counter top and it is not exactly behaving as it normally does.  Renderman is treating it differently so now I have to figure out how, if there is a fix, and how to make it look right.  But for now the placeholder is fine.  All that's left is the wall, the calk, the baseboard, the jugs on top (and their liquid), the small rivets, the limes, adding the geo and textures for the powders, and the background wall, which ultimately should have a metal basket and a lemon in it, which is something else I might add later, but now yet.
Let me know what you think.
(Also I think the IT is putting things in linear space, but for some reason it put this output from rgb and converted it as if it was linear, which darkened it.  So it is too dark now :\  I'll fix that.)

Here is where I am with the first step in the materials: rough blocked in materials.  Again, no lights, unrefined textures, no dirt or grime or imperfections yet.  Just putting something basic in place so I can start the process of putting things together.  Also it will be full of noise cause it's only a test render. 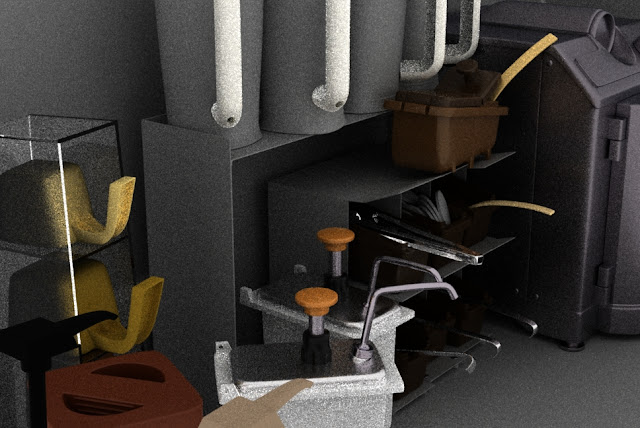 Tell me what you think so far.
Posted by Unknown at 4:11 AM No comments: